“AIP” stands for the AutoImmune Protocol which was originally developed by medical biophysicist Sarah Ballantyne, PhD (aka The Paleo Mom and creator of Nutrivore.com).

Despite having “Autoimmune” in its name, this way of eating is not just for people with autoimmune issues.

It’s incredibly effective at reducing inflammation, and is a great elimination diet for people who think they might have food intolerances.

All CannyNurse® Certificate Program graduates have learned about the AIP, but it may not be a part of their specialty practice. Beyond Ariana’s training as a Registered Nurse and Integrative Nurse Coach™, she completed a year-long training program from the Institute of Integrative Nutrition which covered over 100 different dietary theories. After all of this specialised training and years of self-experimentation and work with clients, the Autoimmune Protocol is Ariana’s preferred way to eat. (That doesn’t mean that it’s everyone else’s “best” way to eat, but it does mean that she’s spent countless hours perfecting recipes for her own family and friends.)

This is a scientifically-validated eating plan, and here are 4 research articles relating to this dietary protocol:

And here is my own anti-inflammatory recipe book (below). 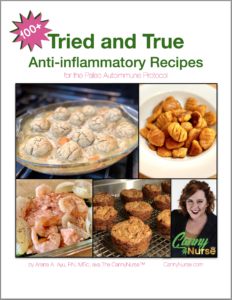 The hardest thing to do is figure out what to eat when you’re switching to a new way of eating, so this solves that problem. This ebook is mostly recipes, but also has information on how to do the Autoimmune Protocol, a sample meal plan and shopping list, information on converting temperatures (F/C), baking pan sizes, and more.

You can download this and send it to patients who are looking to decrease their inflammation, as well as patients who want to eliminate wheat/ gluten, dairy, etc. and need some help getting started.

AIP is an elimination diet that starts by eliminating the most common foods that cause allergies and inflammation. This is known as the “elimination phase” and typically lasts for 3 weeks. This gives the body time to repair itself, and then foods are slowly reintroduced to see if they’re causing reactions (ranging from digestive distress, headaches, allergy, brain fog, symptoms).

Reintroductions are done after a minimum of 3 weeks on the elimination phase (21 days being the sweet spot for people to get over the initial difficulty and find a new sense of stability in their anti-inflammatory eating journey).

81 out of the 86 recipes are also egg-free (since eggs are a reintroduction item in phase 2 of the AIP). I should admit that one other recipe is also non-AIP… there’s a non-dairy recipe for coffee ice cream, and coffee is not allowed during the strict elimination phase, since the coffee “bean” is actually a seed.

The following text is taken from page 7 of the ebook:

Research shows (Abbott et al., 2019, Konijeti et al., 2017) that following the anti-inflammatory diet known as the Autoimmune Protocol, or AIP can decrease systemic inflammation. Systemic inflammation (meaning inflammation that is all over the body, not just in a specific site) is a hallmark of many kind of physiological stress and a sign of an overactive immune system. Decreasing this inflammation can reduce pain, improve health, and may even help people to live longer, healthier lives.

A study by Arai and colleagues (2015) found that low inflammation was the factor that predicted what they called “successful ageing” — in other words, people who lived between 100-104 years (centenarians) and (semi-)supercentenarians, who lived longer than 105 years. The researchers concluded that “Together, our results suggest that suppression of inflammation is the most important driver of successful longevity that increases in importance with advancing age” (p. 1550).

Don’t be confused by the name — the Autoimmune Protocol is not only for autoimmune conditions. Many chronic conditions can be helped by decreasing inflammation. One category that can be greatly helped by an anti-inflammatory diet are Disorders of Gut-Brain Interactions (DGBIs), formerly called Functional Gastrointestinal Disorders (FGIDs), such as IBS/ IBD, cyclic vomiting, dyspepsia (heartburn), GERD/ acid reflux, leaky gut, chronic constipation, etc..

The scientifically-validated Autoimmune Protocol is an excellent dietary approach for people looking to decrease inflammation, reduce disease symptoms and regain their health and vitality. For more details and the full protocol, visit https://www.thepaleomom.com/start-here/ the-autoimmune-protocol/